It is not the sight of the sea, but the stench of the seaweed that takes my breath away as I round the last steep bend into Talland Bay.

Black, russet, amber and brown. Heaped high and shining in the lazy drizzle of an October afternoon. The putrid reek claws at my throat and I swallow hard.

Beyond, under a grey sky, lies a small grey beach that grates and groans to the rhythm of a grey sea, skulking skywards into a grey mist.

All is grey. All is grim.

My spirits are damp as the day. Heavy as lead.

This is far from the scene I imagined: Quiet, unspoiled, beautiful; an Aegean idyll in South East Cornwall …

I slip, trip and slide across to the rocks that slice this smuggler’s haven in half – Rotterdam Beach to the east and Talland Sands lying westward. Here, at least, there is colour in a scattering of deep, crystalline pools.

But little life – the anemones are closed on Sunday and, like a parson at the door, a hermit crab peers blankly out. An occasional shrimp flusters by, then all is still again. Limp and languid and lifeless.

Clambering on, I finally spy the reason for my visit. Exposed by the lowest tide…. 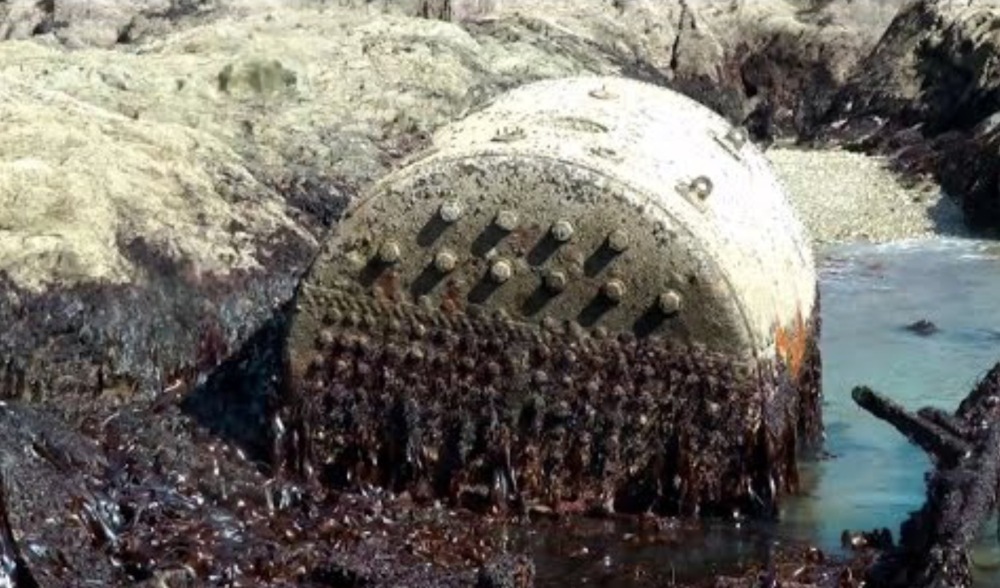 All that remains of the ‘Marguerite’ – a French trawler who lost her bearings during a south-westerly gale in March 1922 and foundered on the rocks. Heavy breakers crashed over the doomed vessel, but the crew of 21, including a ten year old boy, were all rescued by the lifeboat ‘Ryder’ thanks to the skilled seamanship of Coxswain Thomas Toms. The locals also tried to ‘rescue’ the 50 tons of fish on board – but were distressed to find that the prized catch had been turned pink by carbide contamination from the ship’s lighting!

The clouds are lifting a little now and, like a crack in cast iron, the horizon reappears as a sliver of ochre. The wind is rising with the tide and I sense that the opportunity to swim will soon fade with the day.

Returning to the sand and shingle, littered with pebbles of pink and purple, I avoid a recent rockfall and toss my clothes away from the reach of the sea.

Where a wonderful calm sweeps over and suffuses me. A warm, silky saltiness that triggers a relaxation response as intense as it is instant.

The sea always feels like an intimate friend and so, although I often swim alone, I never feel lonely. There is both a delicious freedom and a tender togetherness in swimming out and out. In rising and falling with the swell. In being a creature of the deep.

I can understand why Peggy Oliver wrote:

‘..Where salt breezes act as balm

To my troubled mind to bring me calm.

And so when times are hard to bear

I dream that I have journeyed there

For every single worldly care

Can cease at Talland Bay.’

My solitude is shattered by a group of girls. Students I would say. They appear from nowhere, swim around me for a few minutes in an excitement of chatter, and, like a pod of playful dolphins, are suddenly gone again.

All is silent and special once more.

It is just me and the waves.

And the distant tower of St Tallanus.