Or so the song goes.

Coincidence then that I should unearth this rare and precious commodity on the scrubby moorland  track that leads to Gold Diggings, a long abandoned and flooded granite quarry nestling among the tors of Bodmin Moor.

It had been some 35 years since I last roamed the bleak beauty of these hills as schoolchild and Scout, but I felt instantly at home, surrounded by early heather, late gorse and the memory of friends.

And for a while, a sacred time, there was nothing else. No sound except the occasional business of bees and a far-off whoop of glee as trekking horses broke into a gallop.

No engines, no planes, no motorcycles. No carhorns or chainsaws. No lawns being mowed. No man-made scars on the soundscape.

I paused to luxuriate in this absolute absence of noise.

The air was clear and dew-dappled webs shimmered with morning sunlight as I looked east, towards the fields, farms, lanes, bike rides and adventures that were my childhood, so distant from the electronic prisons that trap and confine children now.

Close by lay the The Hurlers – (An Hurlysi in the Cornish tongue) – three large circles of standing stones whose origins likely date back to Neolithic or Bronze Age times. Tradition has it that they are the petrified remains of men who were turned to stone as punishment for taking part in a hurling contest on the Sabbath. Dowsers still visit from around the world to tap into the immense energy that is said to emanate from this ancient site.

Mark the friendly falconer strolled by, fearsome talons clutching the thick leather gauntlet upon his wrist whilst piercing vigilant eyes darted alarmingly towards me.

We strolled along the remnants of an abandoned railway that once bore locally quarried granite blocks on their journey towards Liskeard and the coast at Looe. Listless cows grazed, the eyes of foals followed us and a dragonfly hurried past. 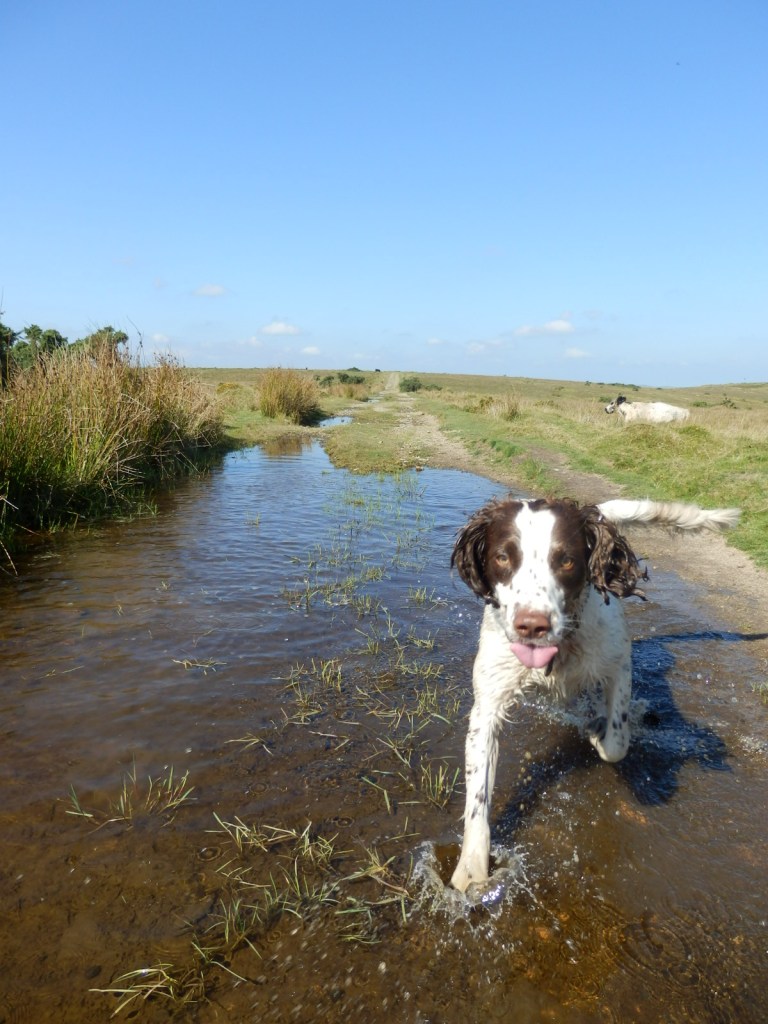 Above one distant quarry, sentinel-like, stood the Cheesewring, an improbable granite stack, sculpted by ice, wind and rain over the millenia. 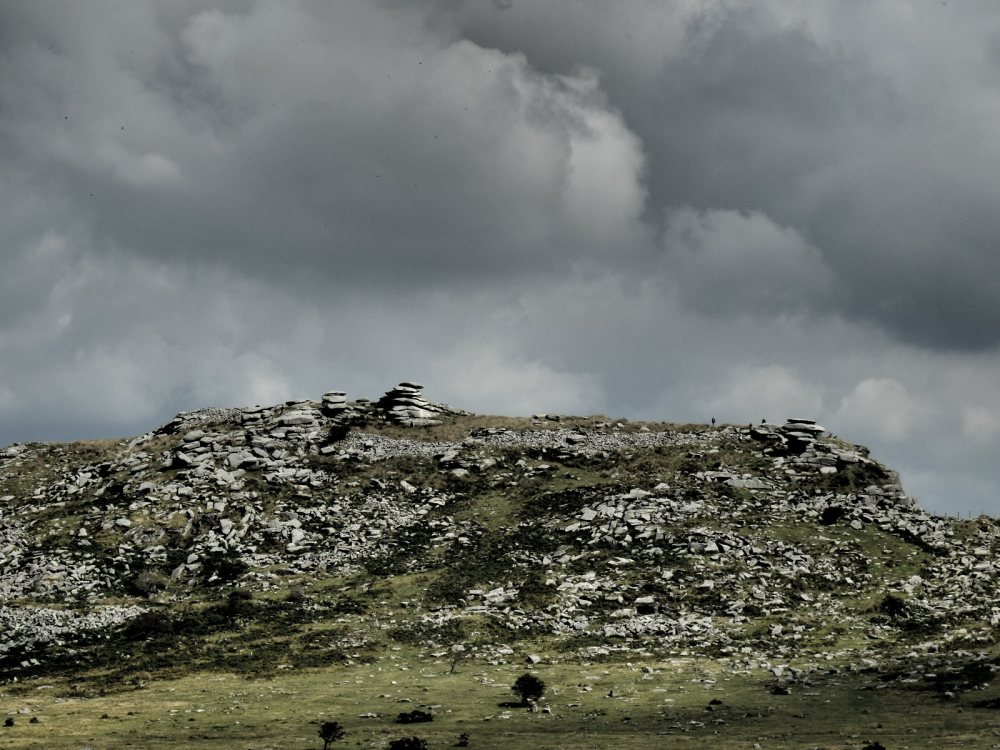 Heading west for a further twenty minutes brought us to our goal; a second quarry, known as Swit or more commonly, Gold Diggings – long abandoned as unprofitable and now flooded with both water and sunlight.

Deserted, except for the echoes of our footsteps, this was a place I had hoped to visit for some time – a swimming hole known to generations of moorland folk. The sun was high and the breeze warm, so I had no hesitation in discarding clothes on the grassy bank and plunging into the delicious (15C)  blue water, whose clarity revealed a myriad fish, some quite large and all inquisitive, nudging and probing my feet.

I set off across the mirrored water, secure in the solitude and serene calm of the lake. An effortless swim, a lazy drift and float. Perfection. Paradise. 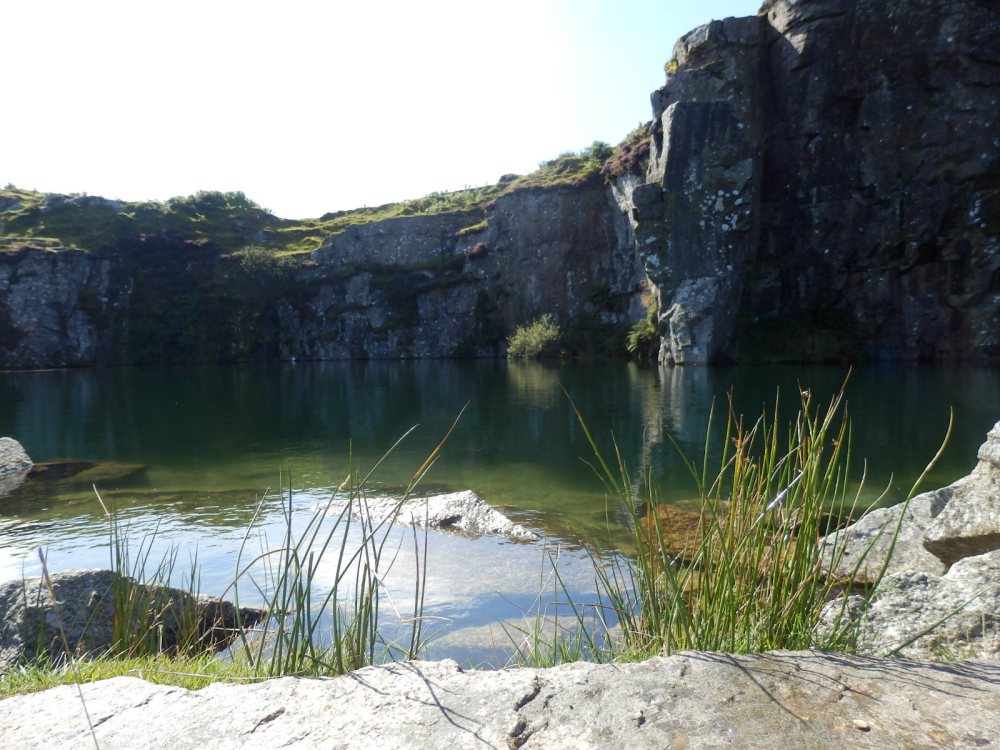 The sudden overhead appearance of a trio of smiling faces shattered the idyll and I hurriedly swam back to the shore and the reluctant modesty of my trunks.

But I needn’t have bothered, for as the happy family descended towards the shore I heard their German voices and relaxed, knowing they were likely to hold a much more liberal and enlightened view of natural swimming than that of the painfully prudish Brits!

For the next 45 minutes I crossed over, cruised around and explored every outcrop and crevice, savouring the occasional brush of warm currents and heading into deeper, darker waters when another family passed by and paused to chat.

A white stallion appeared on the skyline, haughty with extended neck and stare of disdain. I was instantly reminded of the Rain Horse in Ted Hughes’ haunting short story – another schooldays memory. I recalled the English teacher who brought me this tale and his son, my friend, who once walked these moors and maybe does still – I hope in peace now…

Three ‘tombstoners’ appeared, donned wetsuits and defied both death and logic by leaping from the sheer cliff sides. At least they had managed to escape from a virtual world and were now experiencing the thrill of reality – of the moment – without care for the past or concern for the future. They were just being.

Unwrapping a pasty and throwing the crust to an ever-patient Marley Bone, I was perhaps a little envious as I recalled my careless, carefree teens and bit hard into an apple.

A mild wind blew across our faces as we retraced our route back. All was peace again.

And I realised that I was viewing the industrial heritage of my home county in a single, intense vista. 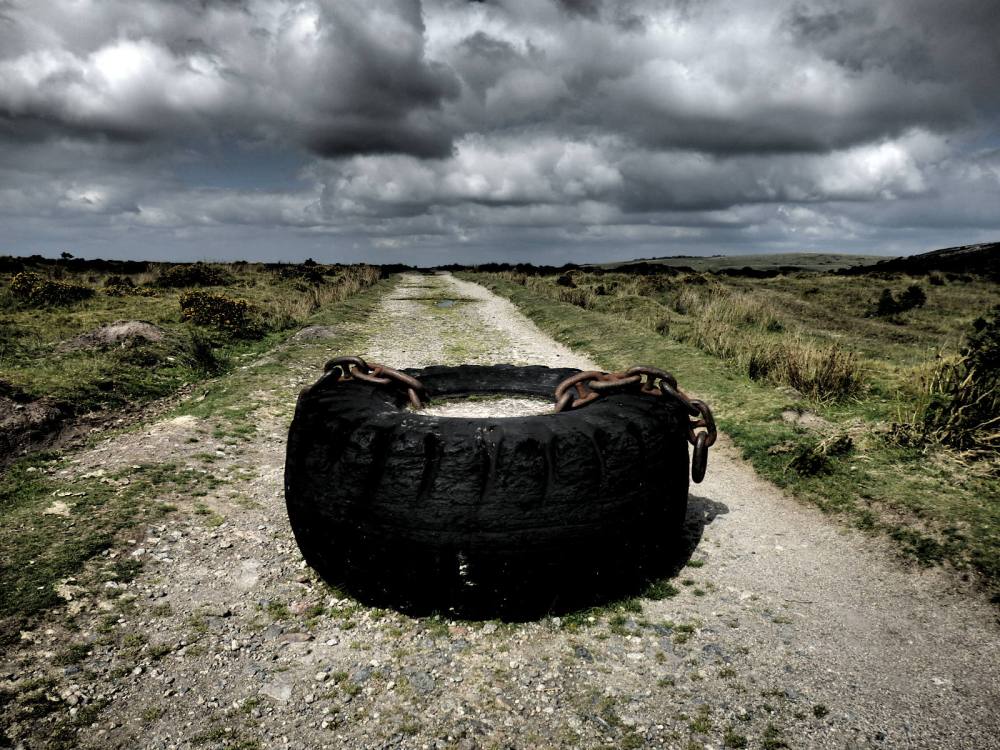 The symbolism was overwhelming…

But when the fish and tin are gone, what are the Cornish boys to do?’