Eastertide: The towering Devon hedges that lead to the river are crowned with daffodils. Like a mighty menorah, a newly pollarded tree with habit violated beyond recognition stands stark against the skyline. Below is strewn a cloak of primroses; yellow as marzipan through a simnel cake.

But deep in the valley it is still autumn and fresh molehills have erupted overnight. An ocean of dew has drenched the meadows and a spectral veil of mist hovers above the glistening grass.

Beech nuts crack underfoot and suddenly it is winter in the bare-boughed forest; emergent nettles standing stunned and frost-frilled in the clearing that separates woodland from water.

Beyond, amid the gorse thorns, where the bitter butteriness of a fresh flowering speaks of resurrection, beech buds are bursting and it is spring again. And my clothes are hanging from a branch above the sand, streaked with the saffron of a rising sun.

But the water boasts an icy grip – at 6.5C it’s as cold as I have known. Wading up to my waist, I feel the thrilling chill of the Tavy wrapped around me. I pause. The shriek of a pheasant in Great North Wood cleaves the air and I launch forward into the void. 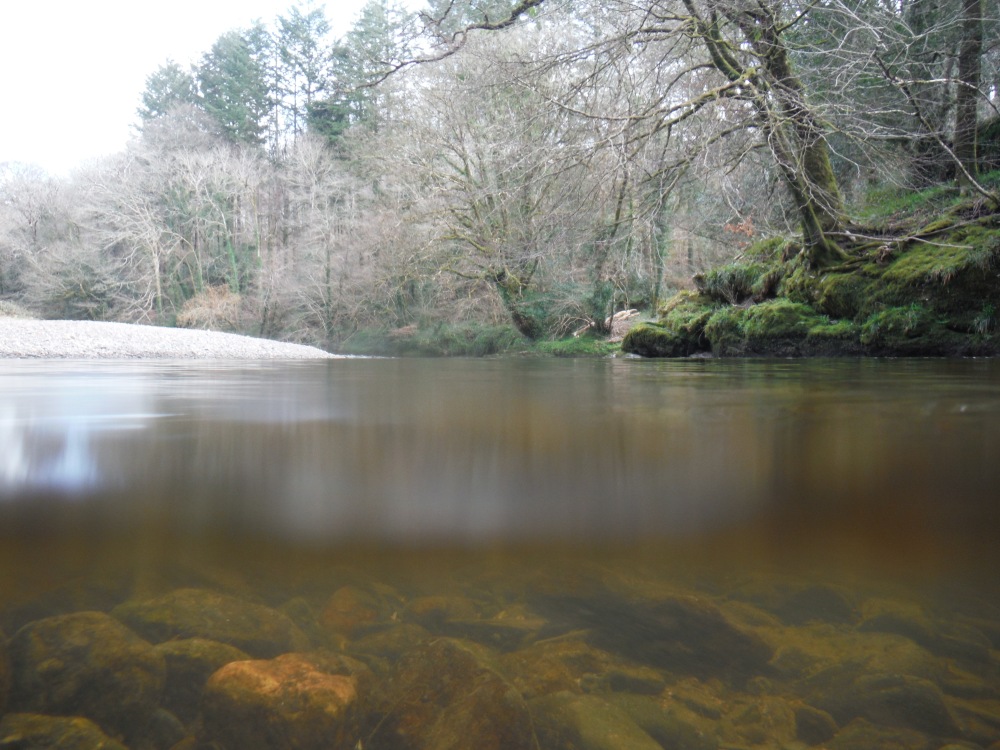 I huff wildly for a few seconds before striking out towards the far bank. Here I perch on a submerged rock shelf, acclimatising in the lea of a vole-pocked bank. Emerald moss clings to trunks and, like ribbons on fairday, strands of grass flutter from branches far above head height – testament to the scourge and spate of December. The rocks are also robed in moss, and on this velvet is laid a perfect composition; a still-life array of pebbles, plants, sticks and a feather. Here is an unexpected thing of exquisite beauty which I study as one would a vast canvas in a gallery.

The cold has made me clumsy as I clamber onto the slip-slide-slate of my diving rock. Marley Bone circles below until I wave him away and dive into the bubbled confusion, all green and gripping. Surging up, my head breaks the surface and in an instant becomes cool and clear as menthol.

A thousand pins puncture and probe my skin. The kingfisher; regular and true as a church clock, powers past. Downstream, a wood pigeon traverses to and fro, to and fro, in tireless courtship.

But I head upstream, beaching myself on the shallow falls that are alive and angry; spitting crystal globules into my face. I turn into their turbulence and am sprung like a trap. Laying back, my head winces in the gelid grip, so I roll into a breaststroke to escape its pain.

The sun is streaming with the river now and two brimstones dance daintily in a delusion of summer.  Bright as sulphur, these are the original butter-coloured-flies, from which their family name is derived.

Bees bumble by. It could be July. I stand steaming in the sun, her warmth on my back. But my skin is red as a scalded prawn and cooled to the thickness of leather. So numbed that I barely feel the towel as I dry. My feet stumble and shudder on the sand. I trip into my trousers.

Over the brim of a trembling cocoa, I spot a sculpted trunk in the shallows; carved into a confusion of curves and crevices.

Dark, dense and leaden. It will look well in my garden, so is lifted to shoulder.

Towards home – back through the unfolding of the seasons.

‘What a difference a day makes’ – or so sang Dinah Washington.

Now multiply that by seven.

A week that has transformed Spitchwick from a place of quiet beauty into a post-apocalyptic landscape of litter and contempt. Where the pristine grass has been seared into a chess board of barbecue burns. Coals and foil tossed aside. Cast-off cartons and cans creaking in the heat.

But the blossom and bluebells have survived the weekenders and on this Wednesday noon the turf is warm and the air pristine. ‘Spitch’ is still a site of sunshine and solace – albeit shared with two couples who lay pressed close together; roasting flesh on an undersized rug.

I lay my own blanket far away; on a small sandy beach, set in a dense dappling of leaves beneath the bank. 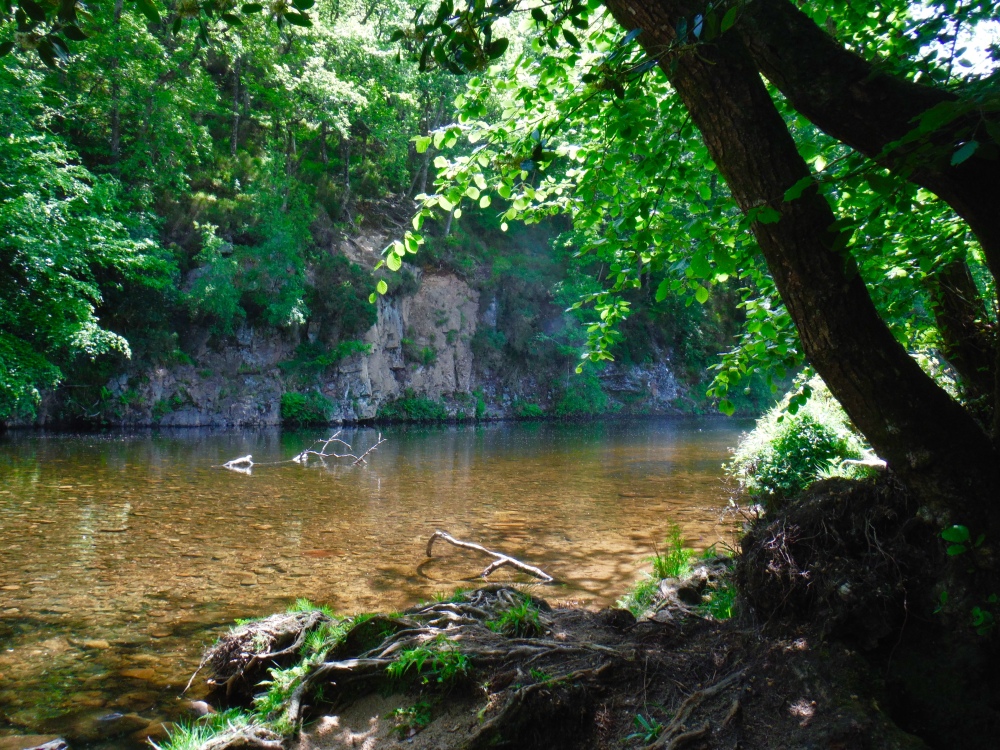 The Dart chatters and sparkles all about me as I settle down to Roger Deakin, a sandwich and luke-warm pasty.

Roger’s words are deep and clear and charged with the energy of experience. The pages turn themselves, rushing by with the impatience of a river in spate – surging and pressing from his pen.

An hour passes. The sun sears through the lens of her sky and I hear footsteps: A woman and child. They pass, smile and head towards the river.

But they make a mistake. They break the cardinal canine rule:

‘NEVER SPREAD A PICNIC BETWEEN A SPANIEL AND WATER’

Thirty minutes later they pass again. The smiles are forced this time…

By now lunch has settled and I hear the call of the Dart – a needy cry that demands only one answer.

So moments later I am tip-toeing past the sleepers. The dreamers. Not a murmur. Their dream goes on.

And my clothes come off. 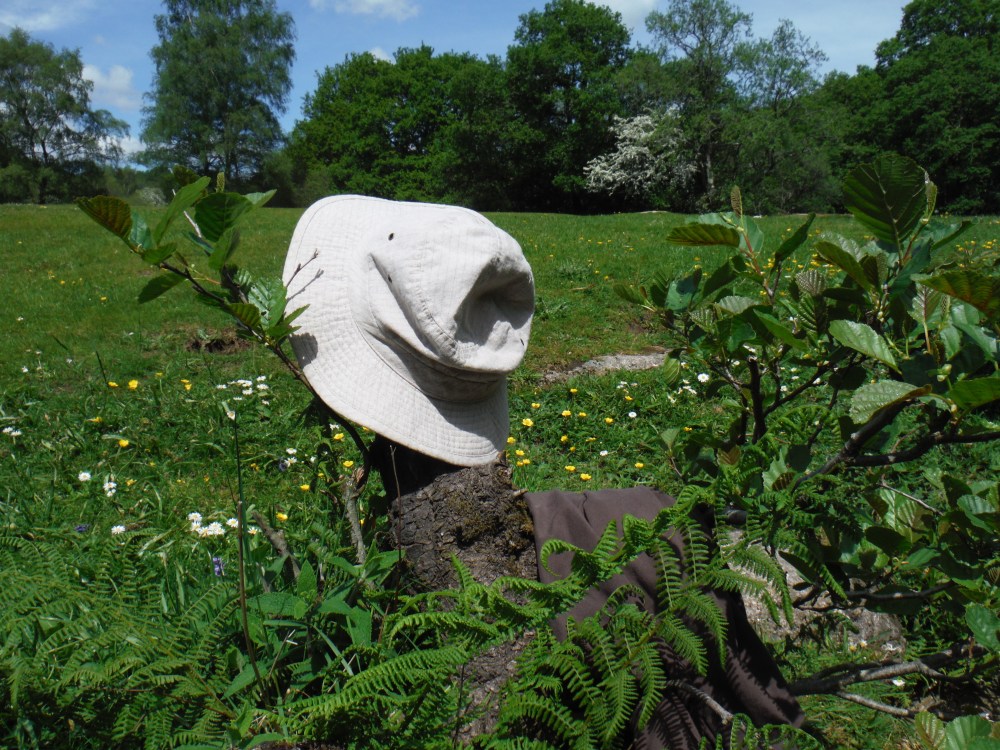 I slip. The kiss of the river and I am swimming. Weightless. Carried in her current. Yesterday and tomorrow are left behind. All is now – condensed into this moment.

And still no movement from the sleepers.

I slide off my shorts – tuck them into the bank.

Securely wrapped in the blackness of the deep, I drift with Mother Dart, probing the bank. What mysteries lie within her burrows – these dark places? The water sings. My ears strain. Can I know her secrets?

Buoyed by our embrace, I spin lazily …. and meet the gaze of eight eyes!

Dreaming no more and watching my every stroke. A shout, a giggle.

I groan and head for the far bank where I languish until interest is lost and all four fall supine again.

But now I have been joined by an unwelcome spirit – the pulsing beat of their boom boom boom box.

I am trapped in the rhythm. An irresistible pressure. Words squeezed from me. A tortuous sinew stutters and cries out. An involuntary rap – conjured from somewhere I hope not to visit again:

It is May and the mercury’s high / Dandelion seeds are drifting by / but the Dart is wet / Yes the river is cool / And I am needy for her midday pools / Crossing the common, with silent tread / Past the heads of the sleepers – four to a bed / Snug as a bug on their rug in the sun/ In shorts and bikinis that will never know the fun of a plunge / In this place. Dark eyes to the sky / Grilling and searing, close together they lie / As I pass by, to their side I glide / Then into the green and ochre I slide, striking out / For the depths, for the shade I aim / Lazy and slow ’til the sound of a name / Of a laugh and a shout – and my secret is out! / For I am unclothed, alone and laid bare / And the couples on the bank they sit and stare / Eating their lunch while the water I tread / Until they lose interest and sink back to their bed…

Somehow, somewhere in the strains of the rhyme I find an exorcism, a freedom. Released and at large, I drift on down until the shallows claim me and my knees grind on their arresting stones. All is silent again. 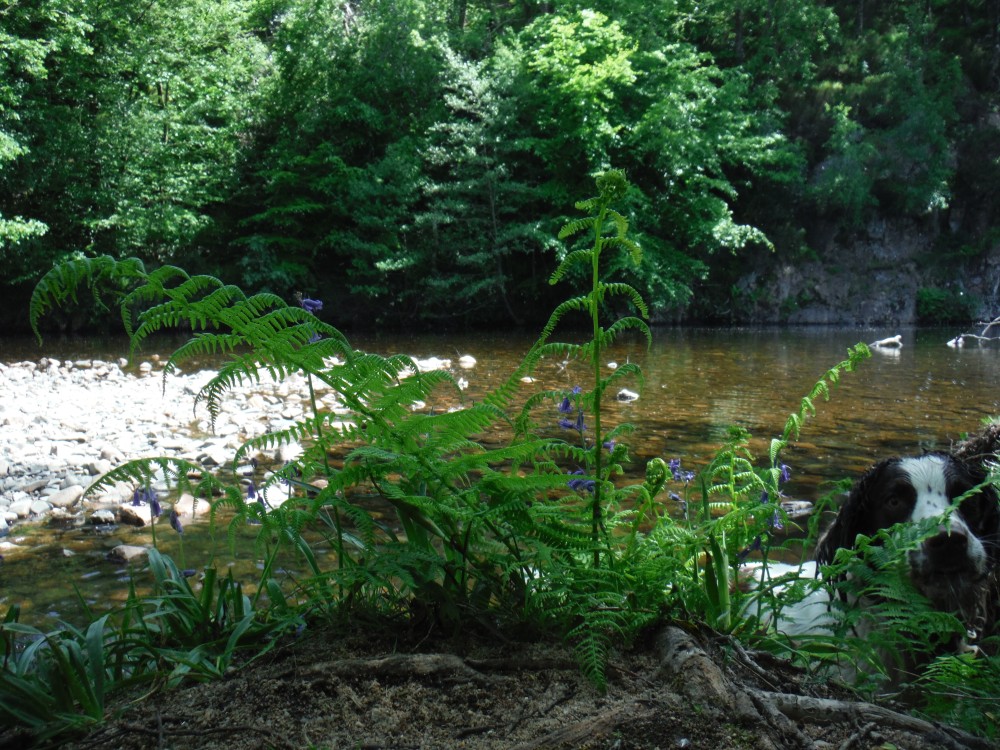 My towel scatters sand on the remnants of lunch as teeth chatter and cold skin claws.

Roger smiles – this was once his bread and butter too.

The hawthorn blossom has burst through and my path back is a marriage of confetti and birdsong.

But within this idyll is scattered man’s detritus: Bottles in the bluebells. Coke cans crush the campion.

The Council has turned away. Fifty bags of rubbish in one day was simply too heavy a burden.

At the laneside, a newly carved sign commands ‘No Open Fires’

The original is long gone.

Burned on a barbecue…