Lanhdrock has to be one of the jewels in the National Trust crown.

Home of the Agar-Robartes family, this stunning stately home was largely rebuilt after a devastating fire in 1881 and is now a ‘must see’ for any visitor to Cornwall. Described as a ‘wealthy but unpretentious family home’ , Lanhydrock is displayed much as it would have been at the turn of the twentieth century, a carefree time for the family before the clouds of the Great War cast a dark shadow over the 22,000 acre estate – (that’s almost 3% of Cornwall.)

The great house stands in extensive grounds – formal gardens, wilder plantings and parkland, these leading down to the River Fowey. Here there is good swimming to be had, particularly at Respryn Bridge, but this can be busy on fine weekends, so after a little research, we settled upon a quieter spot for some Saturday afternoon solace.

Parking at the old Bodmin Road Station (now renamed Bodmin Parkway – an act of banal utilitarian blandness) we surveyed the sleepy scene. There was little sound apart from the buzz of a bumbling bee.

The name, because one afternoon

Of heat, the express-train drew up there

Unwontedly. It was late June.

The steam hissed. Someone cleared his throat.

No one left and no one came

On the bare platform. What I saw

And willows, willow-herb, and grass,

And meadowsweet, and haycocks dry,

Than the high cloudlets in the sky.

And for that minute a blackbird sang

Close by, and round him, mistier,

Farther and farther, all the birds

Of Oxfordshire and Gloucestershire.

I love this poem and the atmosphere it evokes, which is why I went on a pilgrimage to Adlestrop last summer. The station is long gone, but walking in the hills and fields around this tiny village (population 80) one can almost hear the hiss of steam. In just the same way I was experiencing the tranquility of a bygone age, right now, back in my home county. 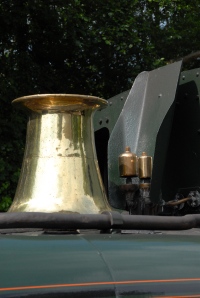 Pushing open the heavy wooden gate that led from the platform, we walked down the drive that would have been an essential link between the great house and the outside world. The start and end of journeys. This was the main rail link to London and here both people and goods would have arrived and departed, perhaps family coming home and surplus kitchen-garden produce departing, bound for Covent Garden or Spitalfields.

Arriving at a bridge over the River Fowey, we diverted down a flight of steep steps and walked along the left hand bank, through lush emerald water meadows, speckled with flag iris and molehills. The skeletal remnant of a once mighty tree served to reflect the fortunes of the Agar-Robartes family – of this extensive, influential pedigree there is only one surving member, now housed in a cottage on the estate.

A reminder of mightier times

Nearby we happened upon a perfect spot for a picnic lunch, beside a right-angled bend in the river with easy access, deep water and a small beach on the wooded shore opposite. Pink campion graced the bank where a gentle slide guided me into the water. I could feel soft mud exuding through my toes as I walked in to first waist, then chest deep and I was off, drifting downstream in the gentlest of currents.

Perfect for a picnic

A frayed ropeswing spoke of bygone times, of excited shrieks and memories made. Of evening sunshine, exhilaration and the tiredness of children. Did the Robartes family ever come to this place I wondered?  Were they permitted to feast on the freedom of the river? 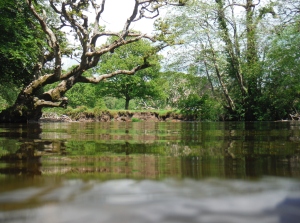 Freedom of the river

Thomas Charles Reginald Agar-Robartes, born 1880, was the eldest of ten children. Schooled at Eton then educated at Oxford, Tommy was a keen horseman who beame a Liberal MP in 1906. Famed for his dapper appearance and trademark buttonhole of violets, he once appeared on the cover of Tatler and was every bit the charming English gentleman. 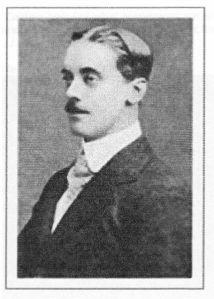 Floating lazily in a wide gyration, I wondered if Tommy had really known the river. Had he discarded his clothes and convention before leaping into these waters? Had he swum from the shingle beach before gazing  up at the sun or stars?

My thoughts were interrupted by the sight of a woman almost towing her sullen teenage son in her wake. Having also discarded my clothes and convention, I took a few strokes towards the high river bank where the water was deep and dark. Here the brown mud was peppered with burrows, like the aftermath of a machine gun attack. Treading water to save mutual embarrassment, I heard their footsteps drawing closer, then pause. “Hallo” she called with a smile and a hearty wave. Treading hard, I echoed her greeting before floating off, back into the green stillness and my musings.

A gentle breeze carried the rhythmic pulse of a steam train over the fields, for the Bodmin & Wenford line still operates nearby. The vintage picture was suddenly complete. It was 1915 and I was enjoying a rich, slow, timeless and simple life here on the surface of the river.

Presently, darkening skies drew over and the air chilled. We retraced the path, past an explosion of rhodedendrons to the railway road where I imagined Tommy in an open-topped car en route to the station, casting a last backwards glance towards his childhood home before rejoining his regiment on the western front.

On September 30th 1915, Captain Thomas Agar-Robartes was in command of No. 2 Coy, 1st Bn, the Coldstream Guards at the battle of Loos. Although wounded, he rescued a comrade from no-mans land under heavy fire.

Tommy was killed by a single shot fired by a German sniper. 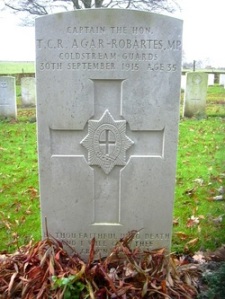 Tommy’s grave at Lapugnoy, near Bethune

The river flows on.