More than sixty winters have flowed in and ebbed out of Padstow since my father launched his teaching career in this once tough coastal town. Nestling at the mouth of the Camel estuary, and hardened by the relentless howl of Atlantic gales, this was then a close-knit fishing community.

And these were lean times for my parents. But throughout the dark months of December and January, frequent parcels of food and bundles of driftwood for the fire were quietly left on the doorstep of the new teacher and his young pregnant wife.

For the motto of the Cornish people is Onen hag Oll – One and All.

This was a time long before the arrival of designer beachwear and chic restaurants, when cottages crawling up the hillside housed local families and the fish on the harbourside was iced, not battered.

In those distant days, the booming sound of a maroon ricocheting down the narrow alleyways heralded the launch of Padstow’s lifeboats. Then the village would fall silent in anxious expectation.

At the school, children would become unsettled – so unteachable that classes were dismissed. For everyone was related to someone on the lifeboats, or had a loved one who harvested the sea, and all knew only too well the dangers of her restless tides.

Did you hear it mourn in the dimorts, when the surf woke up and sighed?

The choughs screamed on the sand,

And the foam flew over land,

And the seas rolled dark on the Doom Bar at the rising of the tide.

More often than not launches were for vessels foundering on this Doom Bar – the very name piercing cold through the hearts of the mariners who plied the waters of An Mor Keltek – the Celtic Sea. Many captains would prefer to face the fury of a north-westerly gale out in the ocean rather than attempt to navigate the treacherous and narrow passage that led to the calmer waters of the Camel.

This sprawling sandbar was likely formed during the reign of Henry VIII; folklore has it that the sands were spread at the behest of a dying mermaid. Murdered by a Padstow man, her curse sought to seal and stifle this tiny port.

And to a large extent she succeeded. It is estimated that over 600 vessels were lost here over the last two hundred years alone, particularly when squalls – known locally as ‘flaws’ – sprung up over Stepper Point and mercilessly drove vessels onto the waiting sands.

It is said that the mermaid’s wailing cry may still be heard, moaning with the wind, whenever lives are lost on the Doom Bar.

But the only cry to be heard on my first visit were the lazy calls of an occasional gull, drifting in widening circles, riding the balmy thermals of an early September evening.

Having taken the narrow headland road north from the town, I left the car in a field at Lellizzick and trekked down through an almost Mediterranean landscape towards the beach at Tregryllas. 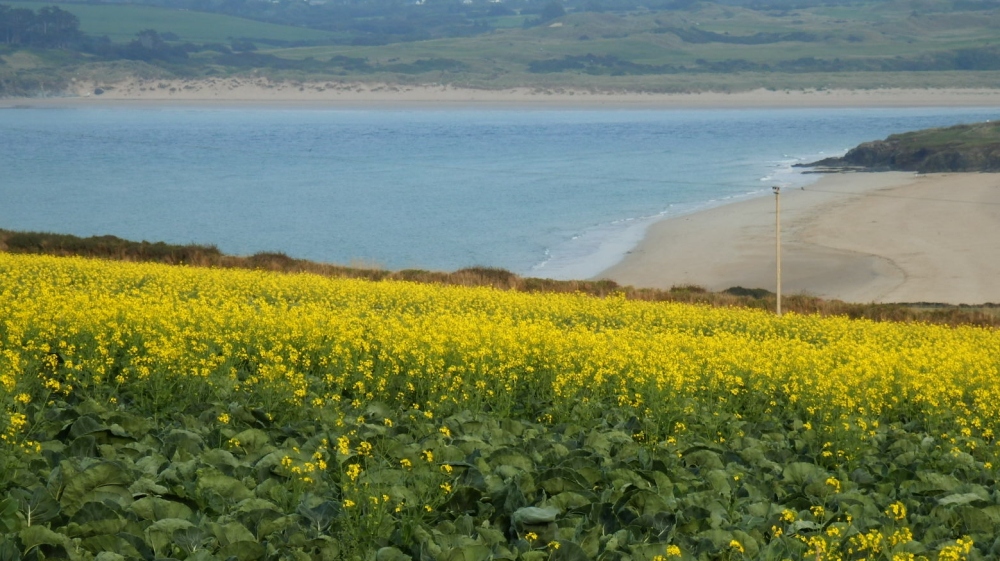 Within a handful of minutes I was emerging through woodland and out onto a blanched carpet of fine white sand, wholly deserted aside from a brace of abandoned lobster pots.

The softness of the sand made walking difficult and it held onto the heat of the day like an oven. Along the high tide line, a community of sandhoppers was emerging from its hidden slumber to feed on organic debris cast aside by the tide. Keen to avoid an irritating bite, I quickly skipped through their territory to where the sands were smooth, dark and still damp from the receding sea.

Jettisoning my clothes, I waded in and was instantly struck by the uncommon warmth of the water; shallow and sun-drenched throughout the afternoon, the estuary had become a vast solar panel.

I had to wade quite some distance before the crystal waters afforded sufficient draught in which to swim, but soon I was heading across the Doom Bar and out towards Daymer Bay and the village of Trebetherick on the opposite shore of the estuary.

Here lies the grave of Sir John Betjeman, a former poet laureate, buried in the tiny churchyard of St Enodoc. This ancient church – known locally as ‘Sinking Neddy’ – was itself once entombed beneath shifting sands. Every year, priest and parishoners were lowered in through a hole in the roof. By holding this annual service, they ensured that St Enodoc remained a place of worship.

I have always enjoyed the works of Betjeman, particularly his writings about the county he loved. His view of this area was lighter and less troubled than Gillington’s. I particularly admire the passage within ‘Summoned by Bells’ – his epic early autobiography in blank verse – in which he recounts an excited schoolboy journey on the train from Waterloo to a holiday on these shores.

‘On Wadebridge Station what a breath of sea

But this was a happier evening. A time to play with the setting sun. To paint patterns with the bright palette of colours squeezed out across the water: aureolin, raw sienna, ochre. A loose wash, liberally spattered with the pigments and hues of a western sky.

The salt and slight swell carried me back to the carefree days of my own childhood, spent around the beaches and bays of Cornwall. As if a sensory trigger had been pulled deep in my subconscious, I recoiled to some distant, undefined moment. Back to a time of sun oil and sinking sandcastles. To the taste of Kelly’s ice-cream and the feel of a proper wooden surfboard. To sea urchins and empty shrimping nets that caught nothing but my hopes.

The memory was but a transient sensation, so gossamer thin and fragile that it almost dissolves in the telling.

As the tide swept on and out of the estuary, like children flooding from the school gate, I turned and struck back towards the beach until the water was barely ankle deep and I was forced to walk the final hundred metres across the sands. I made a mental note to be more aware of this risk when swimming in the buff! 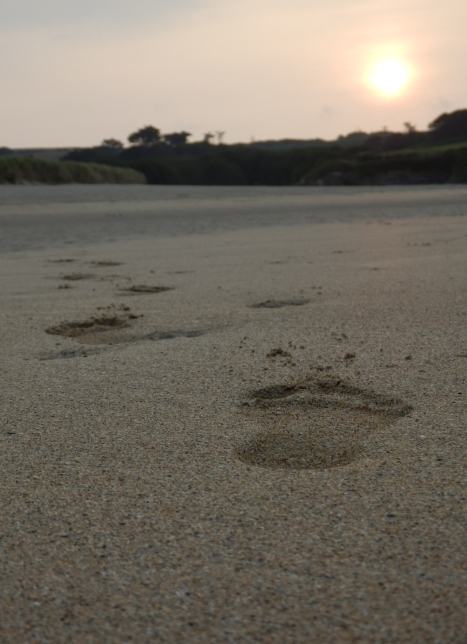 But thankfully the beach was still empty, and soon I was settling down to a snack of sushi and the only appropriate ale for the occasion.

Behind me lay Hawkers Cove, barely more than a silhouette now. Here, stood a row of former coastguard cottages where the actor Edward Woodward lived out his latter years.

And nearby, the long-abandoned lifeboat station stood sentinel over the bay, its slipway rusted to the colour of the setting sun. 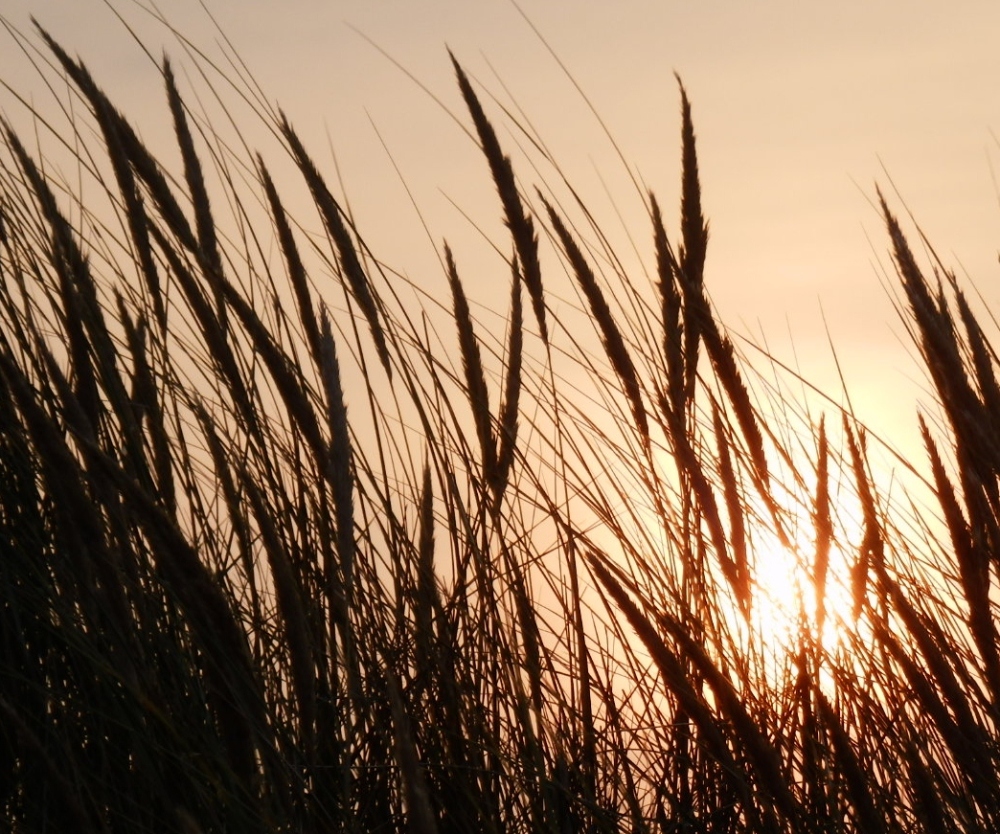 Sitting among the dunes until the last dregs of day had faded like midnight embers, I watched the waxing moon, almost grown to her full glory.

An opal in the clear dusk sky.

Heading back through dying light, towards an inn and supper of fresh local mackerel with warm bread, I fancied I could hear the boy Betjeman; newly arrived and alive with anticipation…

‘The carriage lamps lit up the pennywort

And fennel in the hedges of the lane….

… As out of Derry’s stable came the brake

To drag us up those long, familiar hills,

Past haunted woods, and oil-lit farms and on

To far Trebetherick by the sounding sea.

Oh what a host of questions in me rose:

Were spring tides here or neap? And who was down?

Had Mr Rosevear built himself a house?

Was there another wreck upon Doom Bar?