The garish midnight fireworks had long-since faded into the grey of the morning sky, heavy and overhung as the previous evening’s revellers.

An urgent clatter of windchimes at the bedroom window heralded an unpromising day for a dip, not least because a swell had been gathering in the Channel for some time. Checking-in with the Met Office revealed a steady force 6 gusting to gale 8 with a band of rain due later, so I knew that the sea at Lansallos would be more than a little lively.

Nevertheless, I had been looking forward to renewing my friendship with this very special ‘auld acquaintance’ and the call of the cove was irresistible, whatever the weather.

The tide was set to be favourable during the late afternoon and the horizon was brightening, yellow as saffron, by the time we emerged from the gloom and mud of the woodland path and out onto the narrow promontory that overlooks Lantivet Bay. Narrow, precarious and windswept, with sheer and significant drops to either side, this did not feel like a clever place to be as I bowed and braced into the wind.

But it was simply too beautiful. Majestic, charged waves were clattering against the rocks, unleashing explosions of sound and sending cutting sprays of saltwater across the grey sand and shingle of the beach. 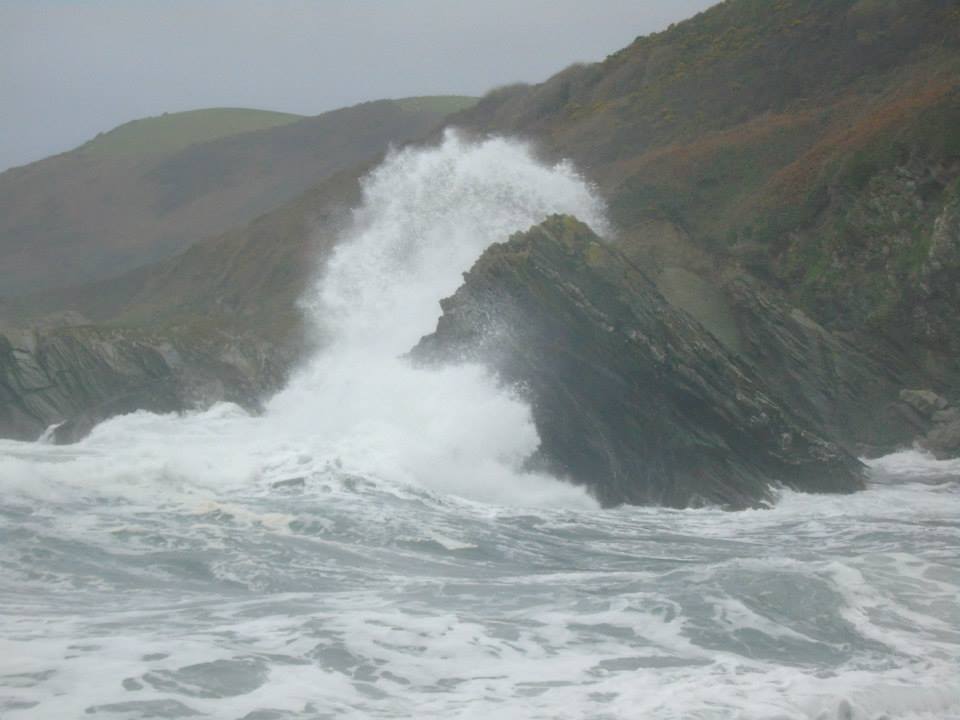 I was surprised by the number of spectators huddled below – about fifteen souls – wrapped in scarves and mufflers against the onshore gusts, but clearly eager to blow away cobwebs and all memories of the night before. Descending through the narrow passageway, reputedly hewn through the slate cliff by free-traders (smugglers) and out onto the sand, I headed away from the crowd and towards the isolation of the eastern side, where I know the rocks have been softened and shaped into fine seats by centuries of swirling tides.

With an urgency, nurtured by two month’s abstention, my shoes and socks were shed and I was wading into the water; at 12 degrees as warm as the air and far more inviting than any hot bath. I’m not sure why I bothered to roll up my trousers, for soon I was overwhelmed and overcome by the relentless surge of the sea – soaked and satisfied, drunk on ozone and thrilling to the sensation of foam on my face and sand streaming in rivulets, out and through my toes as they clutched deep into the shifting sediment.

I observed the currents, watchful for rips, but in truth the sea was a cauldron of wave and counterwave, chop and cut. There was no calm water, no sandy trails to warn of danger. The whole bay was agitated, restless, like an orchestra excited into a conductor-less frenzy, a wild cacophony of sound, worthy of  Schoenberg or Stravinsky.

The light was failing as the last onlookers turned their backs on the sea and headed towards home and perhaps the comfortable aroma of a log fire. But the scent of the sea was in my nostrils and I sensed it was now or never. Shedding my clothes, I skipped into the wonderful wildness of the water, diving deep into the heart of each breaking wave. Into the place where sound is muffled and reality suspended. Where fronds of weed dance in a melee of blue, white and turquoise and where each rush of the tide is matched by a rush of elemental joy. 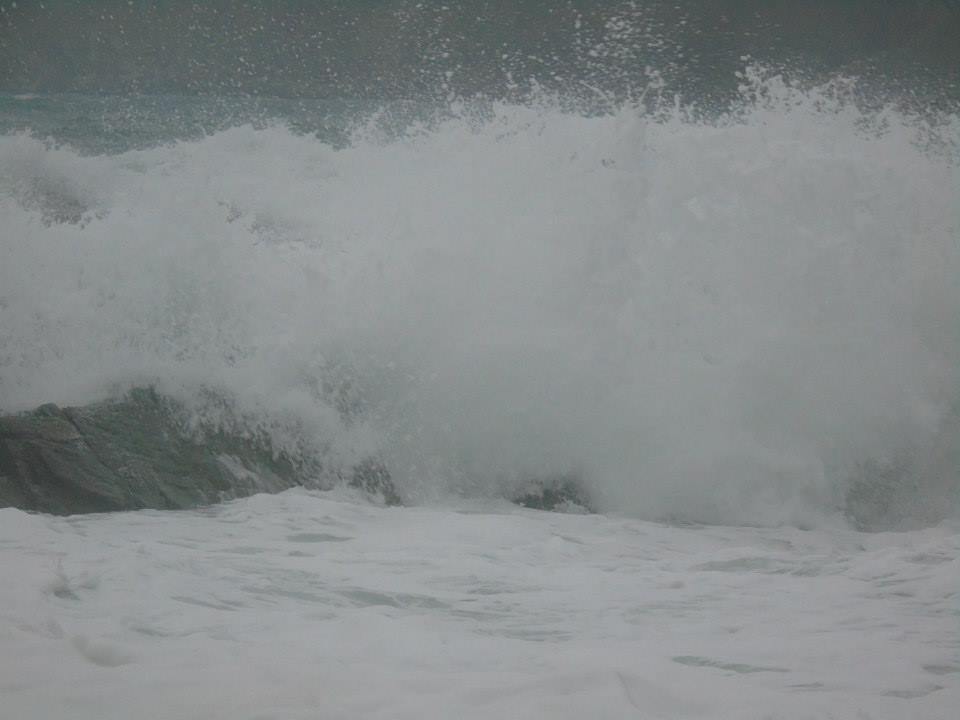 This was no epic swim – it was too dangerous to venture far from the shore, but it was a carefree playground, a place to be tossed and twirled and, like Marley who was always close at hand, a place to keep coming back for more.

As the bland palette of shoreline hues faded and merged into grey uniformity, it was time to head for home, so I launched into the base of the biggest breaker I could see and allowed myself to be bundled back onto the beach where a flask of hot chocolate was waiting.

Much later, standing in the shower, the taste of salt again flowed across my face as I savoured its delicious tang and the memory of my New Year’s Day swim.

And I pondered the year ahead, resolving that regardless of whether the way may be calm or turbulent, I will immerse myself in it and love – (or at very least, learn from) – every trough and crest …