Today, one of my daughter’s is flying away. Flying away to sunny climes.

As we exchange airport texts, my mind drifts back to a holiday we shared last summer.

For it really was a drifting time.

Drifting off the beaten track through impossibly quaint Cotswold hamlets, drifting across golden cornfields under pure blue skies and drifting down the very prettiest of rivers and streams.

To me, this paints a mind picture, not of a howling hoolie, but of a gently winding reed-lined stream. So I was not disappointed when, on a sultry August afternoon, I decided to retrace the footsteps of Roger Deakin, like a disciple on a pilgrimage, to find a swimming hole described with great beauty in ‘Waterlog’ – the book that launched a thousand wild swimmers!

‘About a mile downstream from Burford on the meandering footpath to Widford, I found the finest oxbow bend I have ever seen. Sheep grazed the meadows and the cropped grass was in wonderful condition, springy and deep green. At the narrow turkey neck of the oxbow were two old pollard willows. One of them masqueraded as a hybrid, with dog-roses, hawthorn and elder growing from the marsupial recesses of its anguished trunk. Each was an independent world, with whole cities of insect life in the grimy wrinkles of its bark and generations of bird’s nests in its dense topknot. I slid into the upstream side of the oxbow and swam all around it, almost back to where I had begun, climbing out by the twin willows again. Two hops across the grass and I was back in the river where I began, swimming the next power-assisted lap around the grassy peninsula.’

I rather fancied a ride in this flowing fairground, so we headed to the small and much photographed town of Burford – cover pic of many a chocolate box. 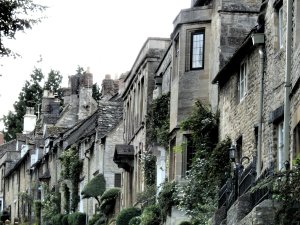 Steeped in history, Burford is remembered as the place where, in May 1649, the leaders of the ‘Levellers’ were finally cornered in the parish church and executed. These three brave men had led a mutiny in Cromwell’s army, believing that their leaders had betrayed the notion that all men were  equal under the law. This desire to level out social inequalities cost them their lives, but their pre-socialist ideals are remembered every year on Leveller’s Day – with a celebration of music, processions and political debate.

Wild swimming is a levelling activity…

Anyone can do it, regardless of class, creed or colour. You don’t need money or have to undertake expensive training. The only equipment you really require is the suit you were born in – and there’s nothing more levelling than that!

Leaving Burford on foot and using a local map that cost 20p – (a poor investment as it transpired – and a lesson always to invest in the Ordnance Survey) – we walked for what seemed an eternity along the busy road leading to Witney and Oxford beyond. The verge was dry and dusty – a Roman march away from the quiet footpath that I had imagined at the day’s dawning. So it was with relief that we turned downhill, left the road behind us and headed down towards the famous oxbow.

Unfortunately in the 14 years since Roger first penned his account, many a pilgrimage must have ensued.

For now the way was barred, fenced and signed as strictly forbidden territory. The addition of searchlights and razor wire would not have rendered the scene any less welcoming. But we were a large group with small children so I did not feel that this was the right time to push boundaries. 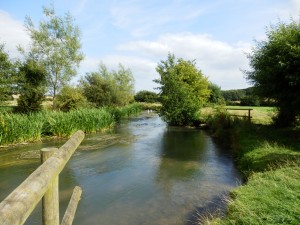 Instead we headed downstream, through fields that afforded no easy river access. A swan with two cygnets looked me up and down with a ‘make my day’ sneer that required no Dr Doolittle translation. 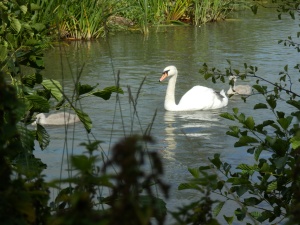 I was beginning to feel a little crest-fallen, a little desolate, when suddenly, rising up ahead of us – Shangri-La.

As if purposely planted as succour to the weary traveller, two sturdy willows stood overhanging a wide pool, casting deep shadows across the water and into the meadow. There could be no better place for a swim and a picnic.

Moments later we were sliding down the muddy bank* and into the still water – slate green and barely moving, like a thin pea broth in the pan of a lazy chef.

*[Memo to self – muddy banks that are great to slide down are not always so great to slither back up!]

The character of the Windrush could not be further removed from the moorland rivers that I am used to. No cool clear waters in a restless hurry, no rattle of stone or foaming fall. Instead, a slow steady procession,  straining through metre long tendrils of emerald weed. Thistledown tumbled from the banks, blown along in the softest of breezes, too little wind to ruffle the perfect reflection of reeds and sky that were painted across the water.

The river bed was gravel and silt, typically three to four feet deep, so we swam upstream with ease before floating down on our backs, receiving a massage from the weed below whilst soft willow leaves casually brushed our faces. No exotic health spa could have offered more!

Like a shipwrecked sailor, Maddie clung to a small log with cries of glee as she too was softly carried down the stream, past tall grasses and fields of ripening barley.

All about us were bankside burrows, speaking of lives unseen in the heat of the afternoon. Here one could meet Ratty, Mole or Mr Toad without surprise, for this English river was quintessentially theirs.

With swimmers drying in the afternoon sun, we took shelter in the shade of the trees and enjoyed a lunch of cheese, chorizo, french bread and fruit. Meadow games followed before we embarked on the tired, slow walk back to Burford with swim bags dangling.

And all around us, the chatter of children and crickets … 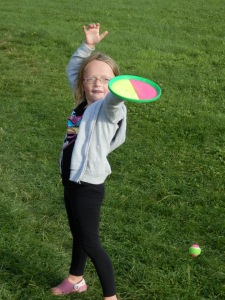