If you wake at midnight, and hear a horse’s feet,
Don’t go drawing back the blind, or looking in the street,
Them that ask no questions isn’t told a lie.
Watch the wall my darling while the Gentlemen go by. 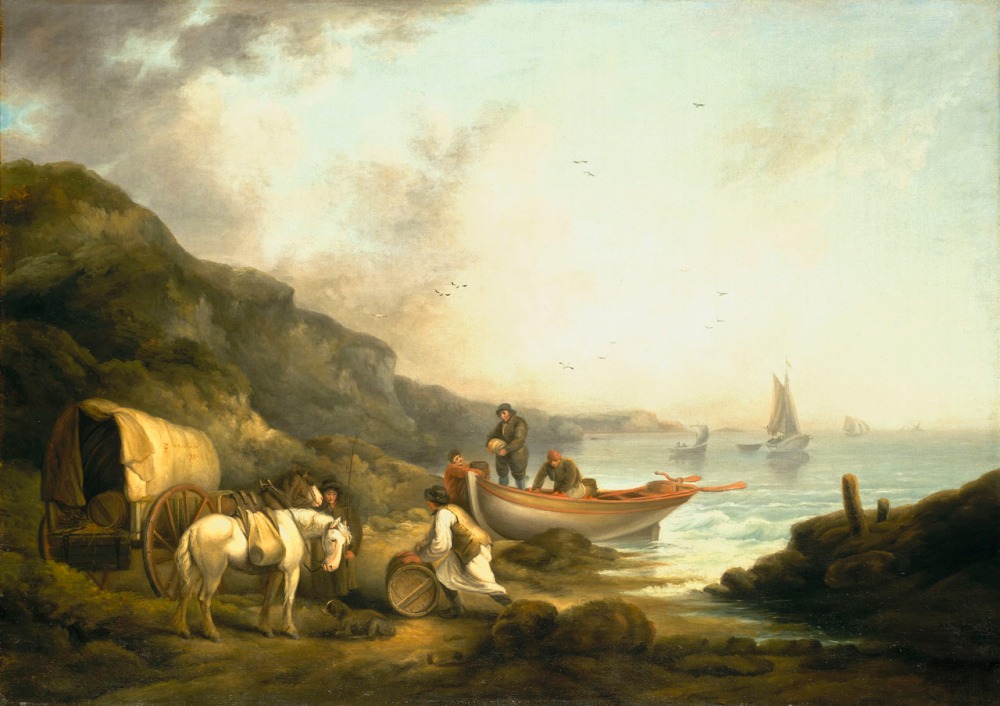 Three centuries ago smuggling was the blood that pulsed through the granite veins of Cornwall. A life blood – nourishing and sustaining every part of a poor and lawless county. Few had no trace or taint of this blood on their hands. For some, ‘free-trading’ meant life itself.

For in many a fishing community, the difference between success and starvation lay in ‘silver darlings’ – fickle shoals of pilchards that swam close to the Cornish coast as summer days began to shorten. Heva! Heva! would be the cry when their silver sparks were spotted and all around would spill into the sea for a welcome harvest.

But if the shoals stayed away, the salting barrels remained empty.

A situation made worse by crippling taxes, levied to pay for England’s military campaigns against American independence. Taxes on spirits soared, tea and tobacco became prohibitively expensive. But most serious of all was the crippling cost of salt – forty times its value. And without salt, the fisherfolk could not preserve whatever they managed to catch.

So they turned their sights towards the ocean: towards a new harvest…. 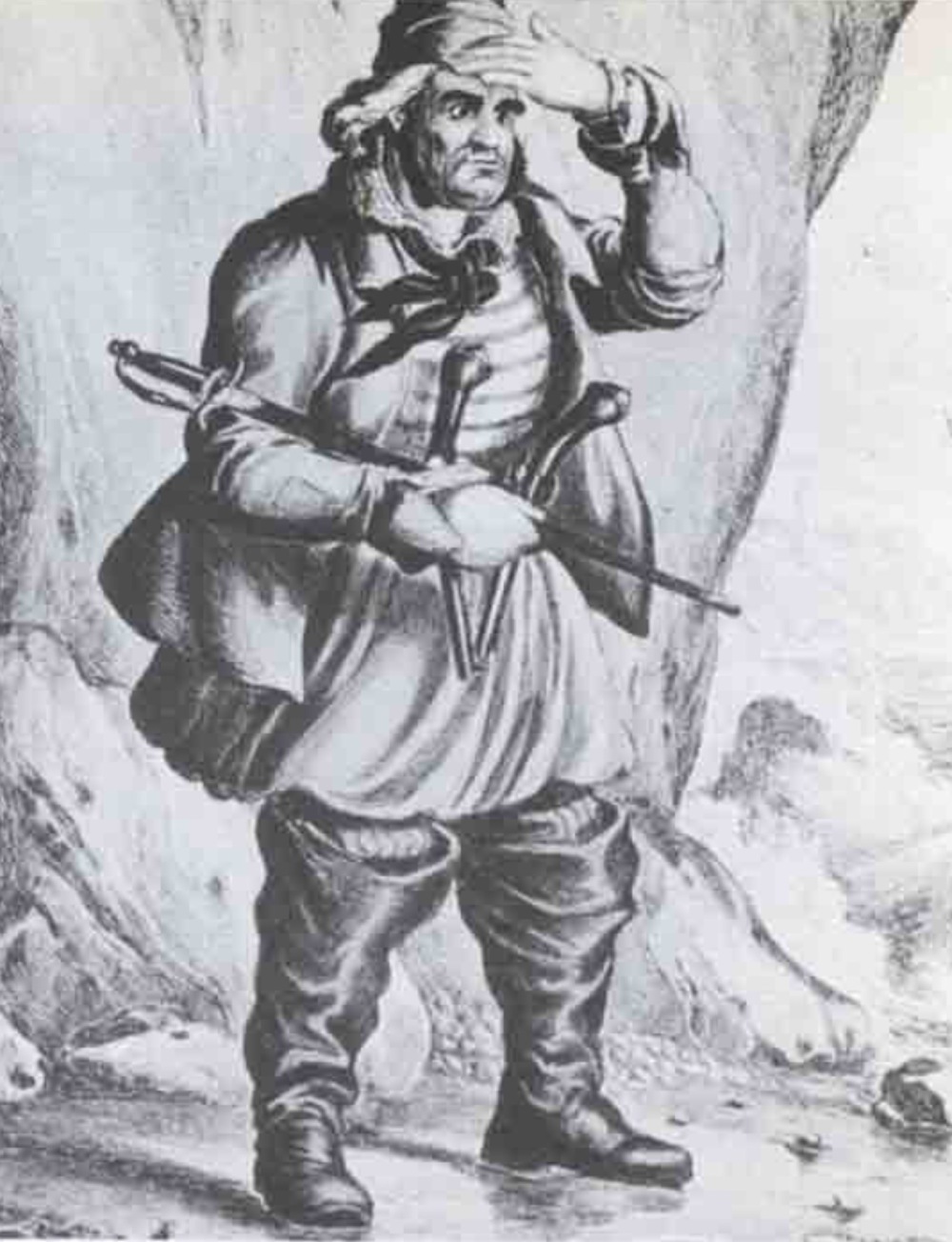 A tax-free trade from France.

Alcohol, tobacco and a host of luxuries, smuggled ashore and spirited away into the Cornish night. A very profitable catch…

And my homeland, the south-east of Cornwall, is soused in tales of smuggling: some tall, some true. Many an isolated cove and cliff-clung community still harbours memories and mementoes of smugglers, long after the tides have claimed their sandy footprints. 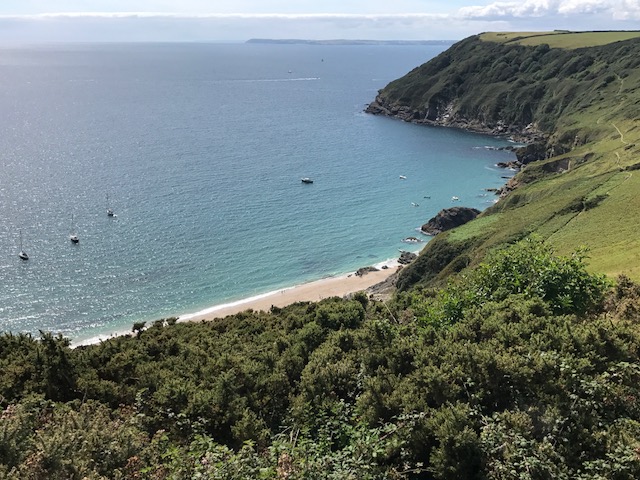 Lantic Bay is such a place. Shaped like the moon that lit the men and mules as they descended the steep footpath from clifftop to shore, this crescent of sand and shingle was a perfect place to land contraband. Inaccessible and almost invisible to the prying eyes of the excisemen.

As I stumble and slip towards the beach in brilliant sunshine and a balmy breeze, I am in awe of the men who trod these paths, in the ebony grip of a midwinter night. Silent and sweat stained. Sinews straining. Stealthy and sure-footed.

And they were many. For smuggling was about communities: covert and close.

Here at Lantic Bay, one hundred smugglers were confronted by men from the Excise. A skirmish ensued and one of the preventive men lay unconscious. But no-one was ever convicted – no one could ever be – not by a Cornish jury!

For everyone had a part to play – squire, parson, publican and magistrate – all stored the contraband that was hauled and manhandled up from the shore. At nearby Talland, the priest was said to raise the dead in the midst of night, so honest villagers stayed away from the churchyard, fearful of the dark shadowy figures seen moving in silent procession towards their ‘resting place’.

At the very least, gentle-folk would turn their backs on the business: seeing nothing, hearing nothing.

But on this August afternoon, the only sight is the sand and shingle, the sun and the sea. The only sound is a rhythmic lapping along the tideline. The only vessels anchored offshore are yachts gently bobbing in blue waters and today the only danger comes from an occasional jellyfish.

It is a good swim, clear and cool, but caution is required, for rips are common and the sea here should be avoided in all but fine weather on an incoming tide.

Th beach is quiet. Few venture to this remote place. Lying back on the sand, I drift and drowse in the gathering heat. Creak of wood, flap of canvas, a muffled oar. 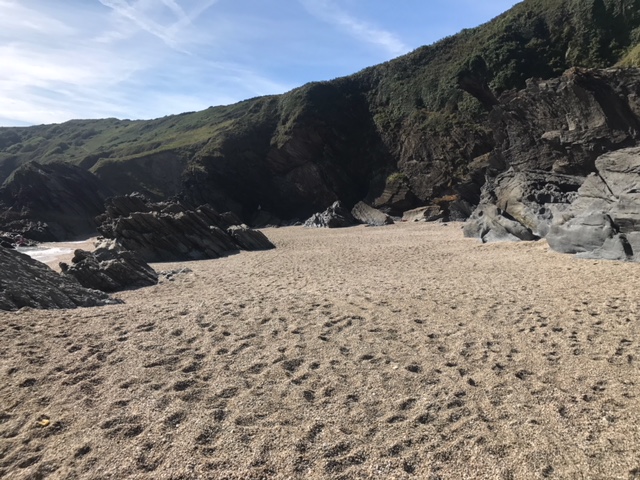 Cry from on high, like a cliff top lookout. I wake with a start! A gull is circling, weaving the thermals like fine french lace.

A westerly wind is gathering and fingers of sand are reaching from the sea to grip the grasses marking my route home. 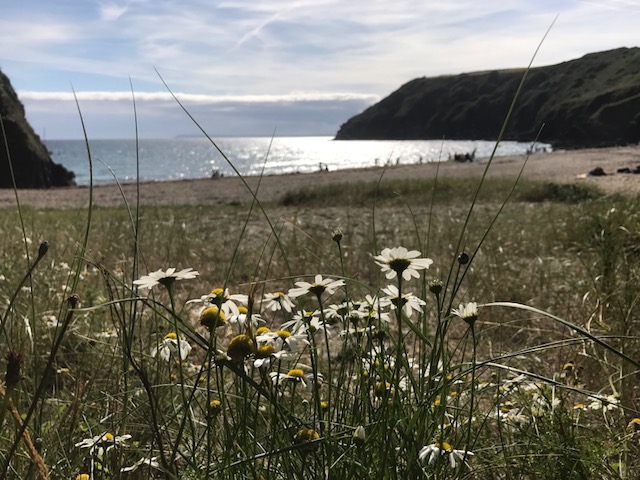 It is growing late. The cliffs rise above me and, although unburdened by barrel, brandy or baccy, I am still breathless by the time the gorse-sharp track yields to an unfolding softness of emerald grass.

Sitting at the summit, I pause awhile, enjoying the tang of salt and sense of satisfaction. 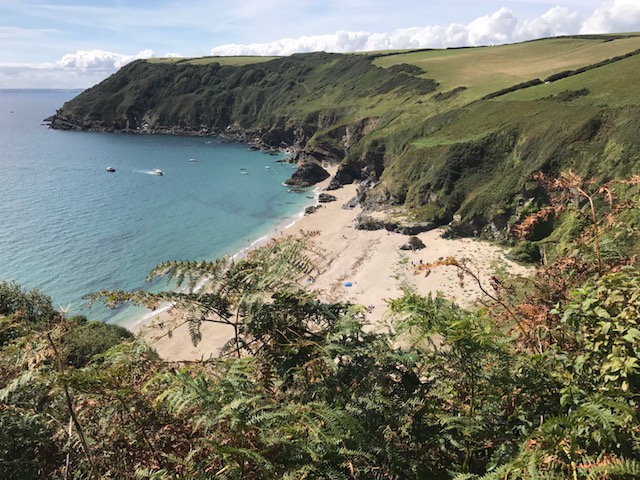 And there is admiration too. Admiration for the grit and guile of my my Cornish kin who cheated hunger and injustice.

There is little smuggling here now; Lower taxation, a reinforced Customs and Excise Service and the rise of Methodism put an end to the free-traders.

But their legacy remains and today it is the history of smuggling that brings a valuable cargo to this still poor county – the trundle and tread of tourism.

For in this place of mist and mystery, the muffed murmurs of yesterday still echo all around…

Five and twenty ponies,
Trotting through the dark –
Brandy for the Parson, ‘Baccy for the Clerk.
Laces for a lady; letters for a spy,
Watch the wall my darling while the Gentlemen go by!