As I write, the boughs of Denham Wood are bare and the air tinged with frost. Autumn has conceded to winter and she, in turn, has swept on and through, trailing the last tattered rags of her icy coat behind. It’s an early spring day but, floating in the river, I am carried back to crisp-leafed October mornings.

When fungal spores flashed in the flare of a declining sun. When abundance and decay walked strangely hand in hand. When the swimming was glorious and breakfast was a feast of blackberries and hot chocolate.

In those days I swam early, whilst the mummies were delivering their beloveds to prep, and long before they arrived to fill the woods with their labradors and chatter. This was often a magical time; ethereal mists, light games through the trees and a calm, clear silence.

In the clearing where Sky luvs Nick, I would kick through sycamore mounds, startling sleepy herons into cumbersome flight. Beyond and beside the Tavy where the grass was thick and deliciously drenched with dew, I would slip off my shoes and savour its wetness. Barefoot on hallowed ground. Past abandoned summer altars, where webs strung across campfire stones were studded with morning diamonds. Here crystal waters skipped over rock and ran on into deep pools where all was stilled once more. 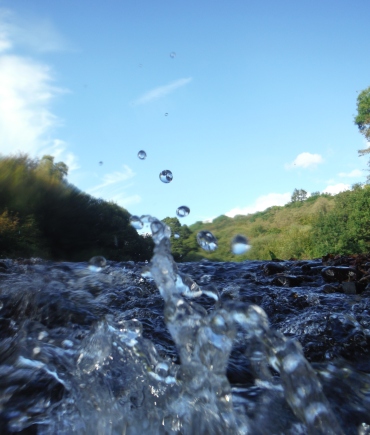 From time to time I would watch leaves drifting down in the meekest of breezes before meeting the river in a silent union. Like shrunken sailboats they would brush my face as I swam – a tiny flotilla navigating through the fog of my warm breath as it hung lazily in the chilled air.

Here and there the surface sparked and burned like sodium – a blaze of fireworks to celebrate the sun’s climb over the ridge of Great North Wood. Deeper, and in stronger currents, leaves danced wildly around me as I dived, before gathering to rest in vast submerged clumps wherever sunken logs barred their dizzy progress.

Just upstream, where a sandy cove has grown in the lea of a fallen tree, I was more often than not treated to a kingfisher flypast. This was usually a transient glory. A hurried blur of colour and energy. Low along the river. Bankside hollow to branched hideout.

According to Greek mythology, the first pair of kingfishers were gods who sacrilegiously referred to themselves as Zeus and Hera. For this they died, but in an act of compassion, the other gods restored them to their watery home. They were also granted fourteen ‘halcyon’ days of storm-free calm in which to raise their young. And it was on onesuch still, serene, halcyon day that the usual shard of orange and turquoise slowed, then materialised before me….

Kingfisher! A close encounter. Always an aching anticipation. And now a reality.

Silently, I eased forwards, barely raising a ripple until I was but a few feet from the stout short-tailed body.

From the oversized head with dagger-bill. From the ebony eyes.

I began to gently tread water. Our gaze met.

But rather than flying, the kingfisher dived, breaking the surface with little sound and emerging with a beak-filled breakfast of pond skater. Then again and again. No flapping fish to satisfy this bird’s daily need to consume its own body weight. Just insect after insect after insect.

A moment of rapture.

Behind me came a loud splash and clatter. I spun around to see Marley Bone arriving at our party. 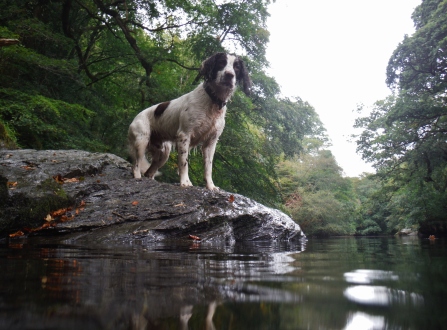 But when I turned back, the branch was bare…

seems to leave a streak of itself behind it

in the bright air. The trees

are all the better for its passing.