There are two things that wild water enthusiasts know about Spitchwick:

You see, it’s all a matter of timing. On an August bank holiday it’s a sprawl of bodies, boom boxes and barbecues – (more on this another day) – and if not hell, then it’s certainly getting pretty toasty!

Which is why we chose a Wednesday morning in the middle of May for a dip in the Dart. 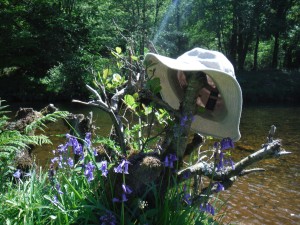 Wherever I lay my hat…

Spitchwick, or Deeper Marsh as it appears on the OS map, has been a popular bathing place for countless generations. Situated on a bend in the River Dart, the large flat grassy expanse of common faces up the wooded hills of Holne Chase with its iron age hill fort. The pretty nearby village of Holne was, appropriately enough, birthplace to Charles Kingsley, author of ‘The Water Babies.’ 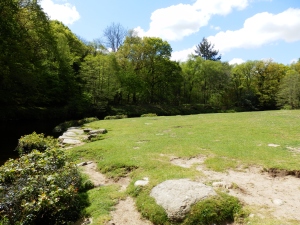 The moorland ‘lawn’ at Spitchwick

And the water here flows fresh from the moor – pure, peaty, cold and clear at this time of year. The river bed is liberally strewn with boulders, hewn from the granite tors over millenia and then coated with a slippery green sheen. My first taste of the Dart came ealier than planned thanks to this – despite wearing swimming shoes, my grip was lost and so was my dignity!

The ochre waters of the Dart

Luckily we were the only folk around, so there was no need to pretend that my sudden descent into the depths was no accident and had been perfectly planned!

I swam across to the far side of the river, partially shadowed by cliffs where tomb-stoners line up to leap into the menacingly dark waters.

Here I swam against the current for some time before my toes numbed – (the left fourth toe is always the first to go and has become my early warning system.) Drifting downstream and into the shallows, I half stood, half stumbled, emerging awkwardly from the water like some freak of evolution before sploshing my way onto the picnic rug so carefully laid out by my partner. A hefty kick of sand added to her disapproval so I sat in the corner, in the shade and in disgrace.

But less so than Marley Bone.

Like Sal, he had spotted the misleadingly named grey wagtail that had perched tantalisingly close to us on a large broken and bleached bough that had floated downstream in a wintry spate. It’s yellow underbelly almost glowed and the long tail dipped repeatedly, lightning fast.

As was our spaniel… For somehow, in the split second between Sal’s finger pressing the button and the camera shutter releasing, MB managed to spring towards the startled bird. Not just once – many times. We now have a fine collection of photographs displaying the blurred tail of a bird and the nose of a dog! 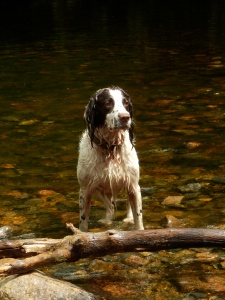 MB – villain of the peace!

Close by, a solitary white tulip meandered downstream and into the shallows where, in a moment so poignant that it could not have been engineered, the lone flower draped itself over a heart shaped rock.

No words were spoken. 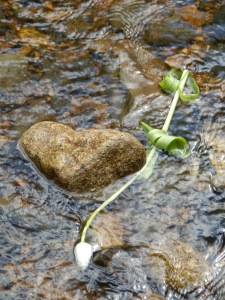 No doubt, further up the river at someone’s once favourite spot, their ashes had been scattered and flowers recently laid.

It reminded me of a time when we lived in a cosy rented cottage that nestled in a woodland clearing alongside the River Meavy. This too was a moorland river, smaller than the Dart, but no less beautiful. We knew every inch of its banks, every bend, every boulder. We knew every rocky fall where there was a noisy and  joyous union of white watery effervescence and mossy greenness.

Here too it was not uncommon to find ashes and wreaths – and I was reminded of some words that I once penned after making such a discovery on a cold February afternoon.

Wet lemon clouds of watercolour wash
Angry river – wild and raw, claws
The shore where summer sticks were tossed
And pebbles thrown, drone
Of ferment, flood and flow o’er
Rocks and rolling stones, sugar brown
The bank’s deposit, settle and shift
Swift the current’s pulse, live
And charging …
Cerulean flash!
The fisher’s king sparks bright
In flight both low and true
And through the spume’s pale veil
Where death has left his wreath
And ash, beneath the oak’s
Soaked roots and shoots of daffodils.

But these were warmer times and, walking barefoot across closely cropped grass, dotted with daisies, we paused frequently to gaze at the patriotic red, white and blue of campion, may blossom and bluebell.

Salute to the red, white and blue

But the warmer times had not yet reached my extremities. I may as well have been walking across hot coals in some Fijian ritual, for my feet had become bundles of cotton wool, numbed and senseless.

It was almost a full hour before they rejoined me!