Lansallos is a very special place. And never more so than when my children are home and we embark on an expedition! So come late afternoon, with the tide falling and the barometer rising, we packed a barbecue and headed west into the emerging sunshine.
Lansallos translates as Lannsalwys in Cornish and is more correctly known as West Coombe Beach after the valley at whose base it nestles. Principal amongst its many charms is the fact that it is rarely busy. And there are several good reasons for this. Firstly, until recently, this small secluded cove has only been known to locals and a handful of others. Secondly, it is reached by long narrow lanes – the sort with grass growing down the centre. A single green line in the middle of the road definitely means ‘no overtaking’!

And lastly, there is the approach. A 1.3km track descends through woods that, although alive with bluebells and the scent of wild garlic in late spring, can become a challenge on the return journey when children are tired and fractious. We have learned to travel light! 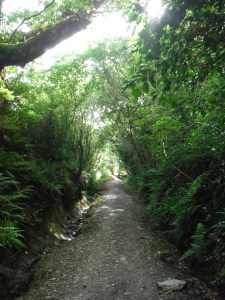 The beautiful, but steep, descent towards the sea

The final drop down to the quartz sand and shingle beach is the most steep. Passing beside a narrow promontory liberally sprinkled with thrift, one descends through a deep gorge cut into the grey rock. Although weather worn, the tracks of a thousand cartwheels remain as visible proof that this was once a smuggling cove in the days when Cornwall was wild, unruly and despised by the more ‘genteel’ folk to the east of the Tamar. (No change there then!) 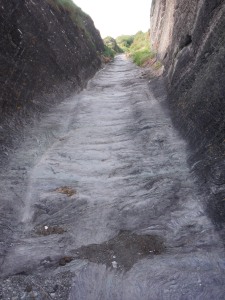 In the tracks of smugglers

So accompanied by the sound of Reed Water, a crashing waterfall and by my 86 year old mother whose glinting eye had revealed a steely determination to visit the ocean so beloved by my parents in younger days, we set foot onto the sheltered horseshoe sands and gazed out across Lantivet Bay, now part-drenched in early evening sunshine. 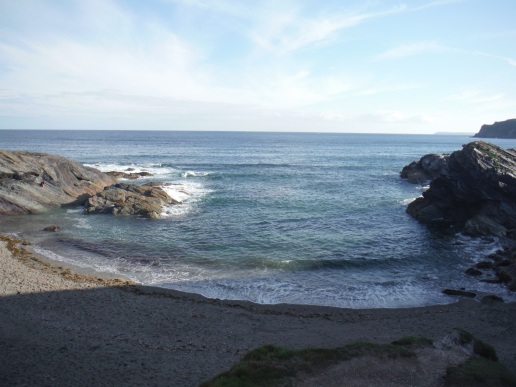 There was a surprising swell, lively waves breaking with an aquamarine, almost Mediterranean hue. This holiday theme continued on entering the water which was far warmer than expected and soon we were swimming towards the mouth of the cove and leaving the heavily folded cliffs behind. 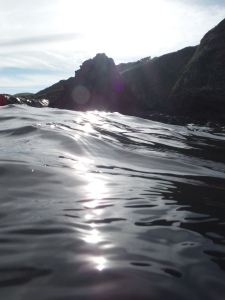 This was my first sea swim in many a month, rivers and lakes having been my more recent companions, but the buoyancy and tang of the salt water felt good as I kicked, dived and floated under a clearing sky. 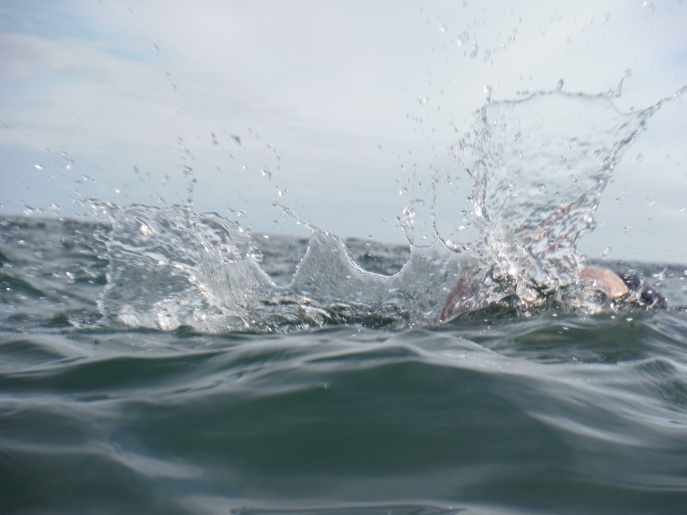 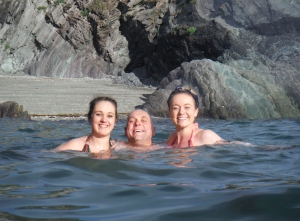 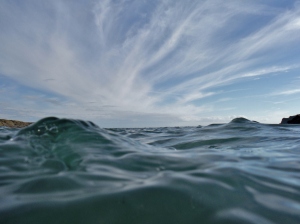 Looking to the horizon 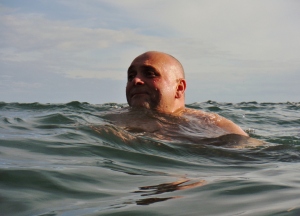 Then, like truculent teenagers in a fifties diner, three frisky waves burst in, flashy and brash, hot on each other’s heels, competing to impress by crashing the loudest against a fiercely toothed outcrop to the west of the bay. We were nudged and jostled, pushed and hassled. Picked up and dropped down. Generally roughed about. But it was a great ride, so we rose and fell at the whims of the swell until the sight of blue smoke wisping up from the beach signalled our call to supper just as the air began to chill and cliff line shadows lengthened.

Pebbles at the high tide line 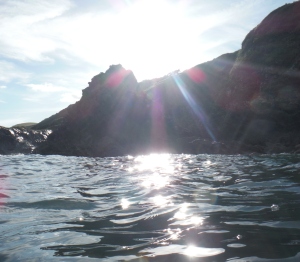 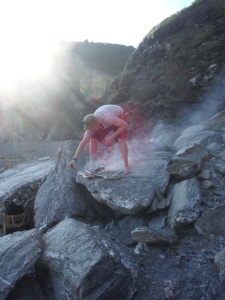